This material has been produced by various people. They have allowed it to be displayed here so that others may be inspired by it and reuse it to help promote Go. In the absence of more specific information below, you can probably assume that the original author made it available under terms roughly equivalent to the Creative Commons Attribution-NonCommercial-ShareAlike licence.

If you would like to contribute anything you have done to this page, simply send it to the webmaster.

You may also wish to look at the current promotional material and some obsolete material produced by the BGA.

Click on an image for a full sized version. 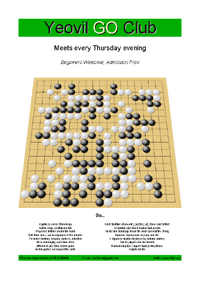 Produced by Julian Davies (Julian.davies at screwfix.com) in 2005. 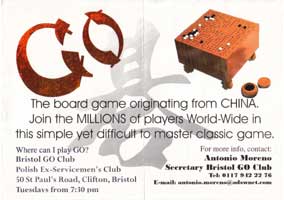 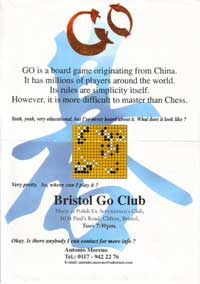 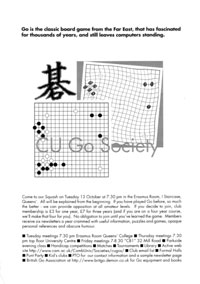 By Charles Matthews in 1998. Charles produced a series of posters for the Cambridge Club throughout the 90s, all variations on the theme of a Go position with accompanying text. On such a poster, it is helpful if the Go position provides examples that can be used to explain at least the capture rule and territory. With this poster it would also be possible to explain ladders, dead stones, and the fact that it is normally better to start by spreading your stones out to make a moyo, rather than just making small bits of territory. These posters were normally printed on a variety of coloured paper for greater impact, and normally A5 sized. 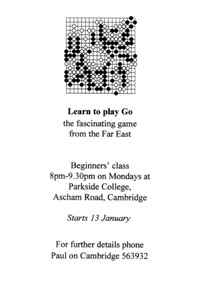