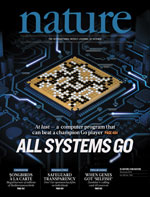 A computer program developed by Google DeepMind (AlphaGo) to play the Oriental game of Go has beaten the three-times European Go Champion and Chinese professional Fan Hui (shown on the right in the photo, courtesy of Google DeepMind). This is the first time that a Go-professional has lost such a match, and not only that, by a clean sweep in all 5 games. This signifies a major step forward in one of the great challenges in the development of artificial intelligence - that of game-playing.

These findings were reported in a peer-reviewed study published in the scientific journal Nature: Silver D. et al. Mastering the game of Go with deep neural networks and tree search. Volume 529, issue 7587, pp 484-489.

The British Go Association recognises the achievement by Google DeepMind. We congratulate them and look forward to the challenge it has issued to the top player in the world for the last 10 years, Lee Sedol from South Korea, to be played in Seoul in March. 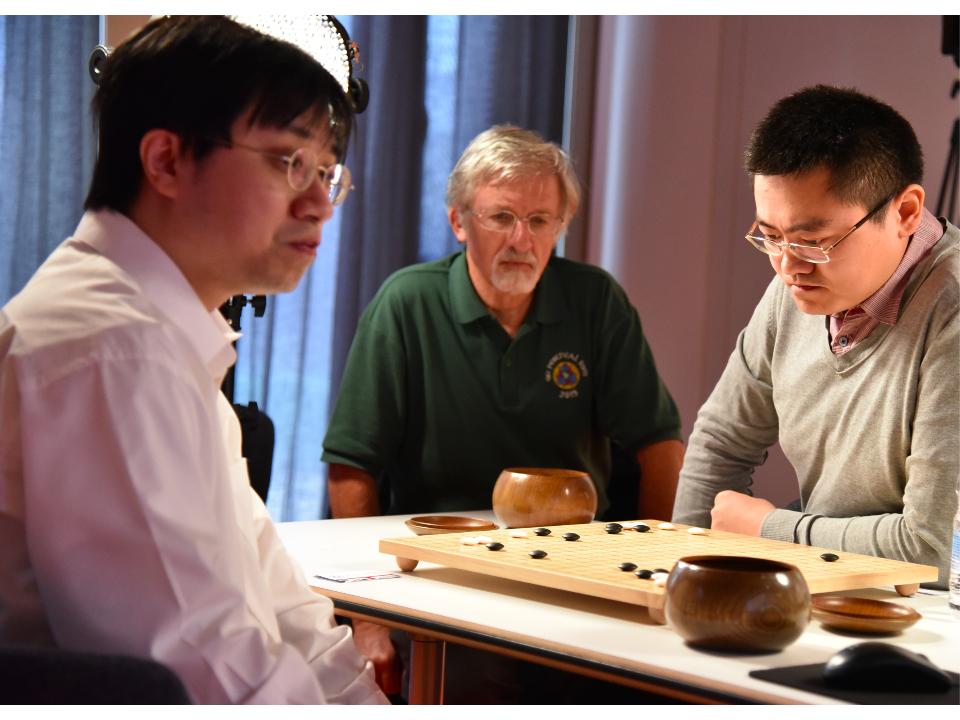 Although we were not officially involved in the match between AlphaGo and Fan Hui, Toby Manning, our Treasurer, was the Referee and observed the games closely. He says
"The games were played under full tournament conditions, and there was no disadvantage to Fan Hui in playing a machine not a man. Google DeepMind are to be congratulated in developing this impressive piece of software".

Our President, Jon Diamond, was one of the early researchers in Computer Go at London University some 40 years ago (see http://britgo.org/computergo/history for some of the history) and says:
"Following the Chess match between Gary Kasparov and IBM's Deep Blue in 1996 the goal of some Artificial Intelligence researchers to beat the top human Go players was an outstanding challenge, perhaps the most difficult one in the realm of games. It's always been acknowledged that the higher branching factor in Go compared to Chess and the higher number of moves in a game made programming Go an order of magnitude more difficult.

On reviewing the games against Fan Hui I was very impressed by AlphaGo's strength and actually found it difficult to decide which side was the computer, when I had no prior knowledge. Before this match the best computer programs were not as good as the top amateur players and I was still expecting that it would be at least 5-10 years before a program would be able to beat the top human players; now it looks like this may be imminent. The proposed Challenge may well be that day.

One significant aspect of this match was that AlphaGo analysed orders of magnitude fewer positions than Deep Blue did. DeepBlue also had a handcrafted evaluation function, which AlphaGo does not. These indicate the general improvements in AI techniques that Google DeepMind have achieved. This surely means that the technology behind it will be really useful in other knowledge domains."

Hajin Lee, Secretary General of the International Go Federation and a Korean Go Professional, said:
"AlphaGo's strength is truly impressive! I was surprised enough when I heard Fan Hui lost, but it feels more real to see the game records.

My overall impression was that AlphaGo seemed stronger than Fan, but I couldn't tell by how much. I still doubt that it's strong enough to play the world's top professionals, but maybe it becomes stronger when it faces a stronger opponent."

An article by Toby Manning about the match, including the game records and comments, will appear shortly in the next British Go Journal (the magazine of the British Go Association). Because of the international significance of this match, we're publishing a publicly available version of this article online on our website http://www.britgo.org/deepmind2016.

Regarding the challenge match Lee Sedol said:
"This is the first time that a computer has challenged a top human pro in an even game, and I am privileged to be the one to play it. Regardless of the result, it will be a meaningful event in Baduk (Go) history. I have heard that Google DeepMind's AI is surprisingly strong and getting stronger, but I am confident that I can win at least this time."

Jaeho Yang (Secretary General, Korean Baduk Association) said:
"We welcome the development of computer AI with Google DeepMind and its challenge to Lee Sedol. It will be an exciting event for all Baduk players around the world. About the result, I think the computer may win one or two games because Lee Sedol hasn't played any strong computer AI before, but I doubt that the computer can win the overall match."

Just as the Kasparov/Deep Blue match did not signal the end of Chess between humans, so this development of AlphaGo does not signal the end of playing Go between humans. Computers have changed the way that players study and play Chess (see this Wired article from 2012: http://www.wired.com/2012/09/usa-chess-texas-tech-computer/, and we expect something similar to occur in the field of Go, but not necessarily as assistance during play.

It has been recognised for a long time that achievements in game-playing have contributed to developments in other areas, with the game of Go being the pinnacle of perfect knowledge games. The previous major breakthrough in computer Go, the introduction of Monte-Carlo tree search, led to corresponding advances in many other domains such as planning and constraint satisfaction. Facial recognition seems just one of the obvious areas that the techniques developed by Google DeepMind will be useful for.

We're pleased to say that Hajin Lee, a Korean professional, has contributed to the comments in Toby's article and that some of our members were part of the Google DeepMind team, which is based in London.

We're also happy to say that Google DeepMind are providing some sponsorship to us in recognition of our part in organising this match and their interest in growing the Go community.

Toby will feature in a video that Nature are producing and Jon in a number of press articles about the event.

Nature have published a main news story with the video Google AI algorithm masters ancient game of Go and a separate one Go players react to computer defeat.