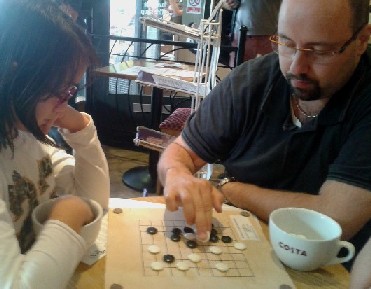 The Learn Go Week event in Stevenage went pretty smoothly, with some great support from Letchworth Go Club and the BGA. Phil Smeaton, manager of Costa's in Stevenage High Street, kindly allowed us to take over part of the café for four hours on the Sunday afternoon, as well as generously covering printing costs and issuing a flyer with invitation to learn Go to every customer during the event.

However, despite the flyers and the posters which went up in many places around town, and coverage in the largest local paper (Stevenage Comet), only three people actually asked to be taught. They were a resident Italian family, who saw the item in the Comet. They were incredibly enthusiastic about the game (see photo), live very close to Letchworth Go Club and were interested in the BGA.

Seven players from Stone Free Go and Letchworth Go Club turned up and played Go in view of passers-by, enjoying playing in public. It is a long time time since the Stevenage Go Club closed and it is hoped this will not be the last time Go is played in the town.

A report was sent again to the Comet and information was sent to a woman who enquired but missed the event.

Although it was such a limited response, it was also good fun organising something and seeing it happen without adverse incident, especially in the knowledge that we were part of a worldwide event. Many thanks to Go Game Guru for having such a good idea.