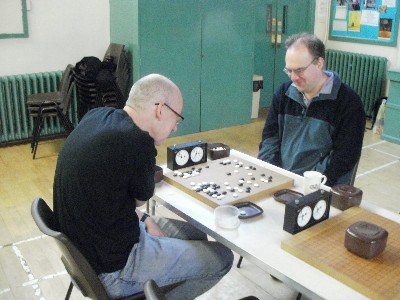 Organiser Alison Bexfield wished that all the 26 players at the first Letchworth Rapid Play had fun, and the thirty minute time limits saw most games ending in fun battles and not reaching their natural end. The venue was the Central Methodist Church in Letchworth Garden City which allowed the main group of players to be in the hall, but also a group of junior novices to be able to play 13x13 games in a side room.

The Novices Tournament was won Greg Briscoe from Cambridge; he beat Josh Terry from Bungay in the final, having drawn with him earlier. All other juniors went away with small prizes, including best improved Immy and best puzzle solver Iwan.