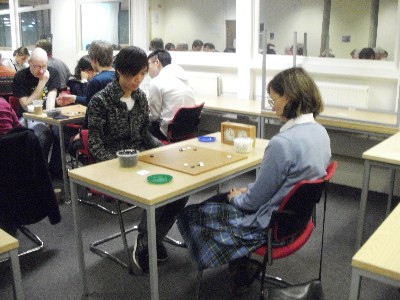 For a second year running the Coventry Tournament had a local winner. As the previous winner, Bruno Poltronieri, concentrated on organising, it was his University of Warwick club mate Philip Leung (5d) who won this time. He was rewarded with a bottle of port and a box of Maltesers. Second was Wu Ruizhu (5d) also from Warwick and third was Alison Bexfield from Letchworth. Those on 3/3 also got prizes: Ben Riddell (2k Cheltenham), Andre Cockburn (7k Nottingham), John Capper (12k Nottingham) and Christopher Manser (17k Warwick). 32 players took part.