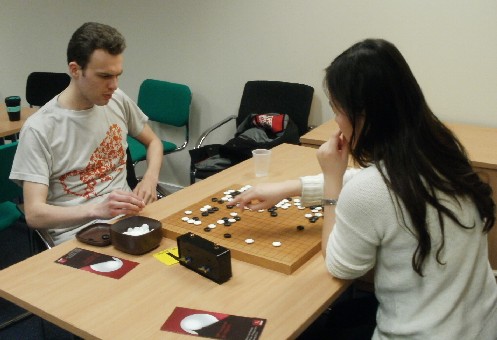 Charles Hibbert from London entered Maidenhead-Hitachi Tournament as his first ever tournament. Having achieved 3d on both KGS and IGS, he entered at 2 dan and went on to win all three games to claim the Maidenhead title.

Also winning three games, and in second and third place, were Alistair Wall (1d Wanstead) and Jitka Bartova (1d Praha). As usual all players winning three or two games got a prize from the eclectic selection on the prize table or, this year, a mystery envelope. Those on three were: France Ellul (6k Maidenhead) and Fred Holroyd (8k Milton Keynes). 55 players took part.

Both Wanstead and Leamington teams won 9 games out of 16 to get the team prizes of sweets and chocolate. Charlotte Bexfield and Edmund Smith both won 4 games in the 13x13 side event.