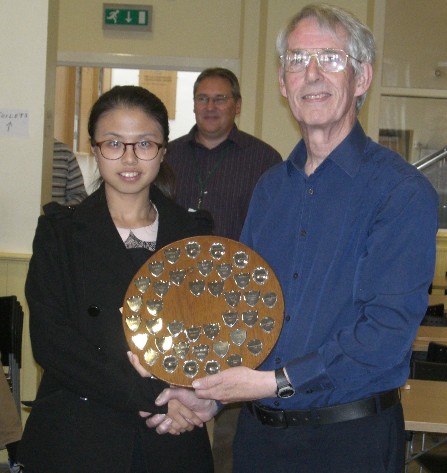 The Northern - held annually since 1975 - stepped back to its educational roots this year, with a new venue at Cheadle Hulme School (CHS) in Cheshire. The very attractive and spacious venue attracted 37 competitors (23% up on last year). Most encouragingly, 11 competitors were youngsters.

The winner was Xinyi "Sugar" Liu; she is a 3 dan from China studying in Manchester. She won a cash prize and the Red Rose Trophy, seen receiving it from organiser Chris Kirkham (with CHS' Head of Physics - Mike Winslow behind).

Baoliang Zhang, 1 kyu from Manchester, was runner-up. Also receiving prizes for winning all three games were Andy Upton (a novice CHS parent), Alan Stokes (10 kyu from Manchester) and Runze Miao (6 kyu from Nottingham). The tournament was also notable for a small number of games with very large handicaps (9 stones and 165 komi being the largest!). 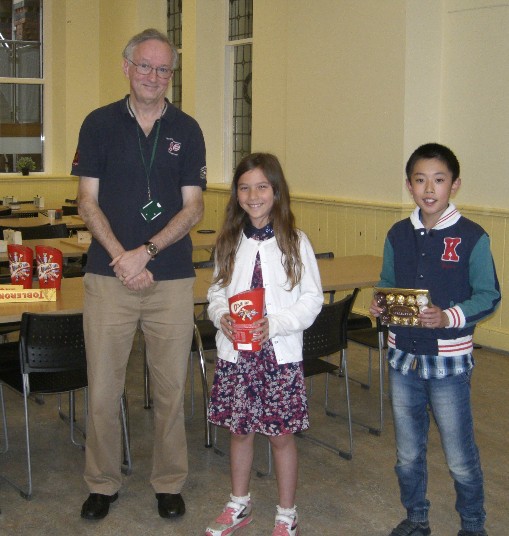 Prizes were also awarded to recognise fighting spirit in some of the youngsters, and in the self-paired 13x13 competition - the latter sporting 18 competitors plus some parents. Amy Parker and Daniel Low won the most games played prizes - seen right with 13x13 organiser Martin Harvey.

Chris Kirkham and the other organisers are very grateful to CHS, for their generous provision of accommodation with ample free parking, and to Mike Winslow, Head of Physics, who spent the whole day learning about Go and chatting to some of the parents who had brought their children to the tournament. Thought is being given to moving the date of the Northern in future to bring it into school term time, to enable more students to attend.