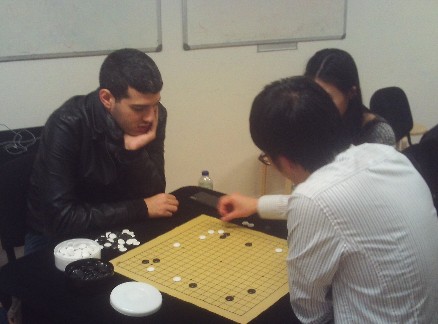 The BGA's flagship tournament - the [45th] London Open - started as usual on Friday 28th December and ran until 31st December at its new venue of the London Go Centre. The event was limited in numbers because of it was being run at the London Go Centre for the first time and the organisers wanted to make sure things worked with a smaller venue, but still 89 players (including ghosts) took part. Next year they will be able to accept more registrations. Representing 14 countries, the players ranged from 30k to 7d, including some strong children, and there was a large party from Germany. The teaching this year was provided by European professional Ali Jabarin, from Israel, who is shown in an analysis. Also Fan Hui from France popped in for a visit. Zoe Constans from France was there sketching and selling portraits of the various players. There was the usual range of side events and a New Year's Eve meal at one of the many nearby restaurants. 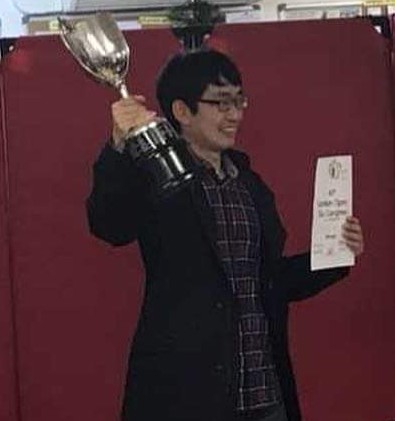 Unfortunately a computer crash meant the final results table was not available to decide the prize winners, but it was clear that the winner was Chi-Min Oh (7d) from France, winning all his seven games to take the trophy and the cash prize for the third time. Two UK-based players were second and third - Zhiqing Zhang and Guodong Cao. The top British player, winning the David Ward Trophy, was Andrew Kay (4d). Top player below the bar was Tim Hunt, with Alex Rix in second and Zhanqi Kang in third (all 2d UK). Top kyu players were Jannik Gram (1k Denmark), Joerg Sonnenberger (1k Germany) and Francis Roads (1k UK). Top Double Digit Kyu was Dora Kollner (10k Hungary), followed by Gudrun Breitenbauch (10k Germany) and Dave Wheeler (12k UK). Players doing well all received a certificate and either cash or vouchers to Guo Juan's Internet Go School, thanks to that teacher. Winning six games were Natacha Mabille (16k Belgium) and Jan Willemson (5k Estonia), and those with five wins were rewarded too. Results 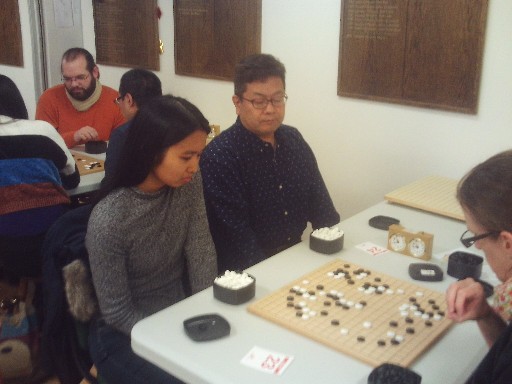 The first side event was the London Pair Go on the evening of the 29th. The best of the 14 pairs who enjoyed a fun but competitive event were Nagisa Mutsuura and Takeshi Mutsuura from Japan. Second were Zoe Constans and Chi-Min Oh. Results The evening of the 30th was the Lightning. Zoe Constans proved a low-graded player could win one of the qualifying groups, but lost in the semi-finals. Lucas Neirynck fought hard against Chi-Min Oh in the final, but it was the 7d that triumphed in a game that ended with seconds left to go on the clocks. The final side event was that after the prize giving ceremony, namely the Rengo which was won by a team of Danes: Jannik Gram and David Sprehn were the Danes who came first and Uffe Jensen, Mikkel Mathiesen and Mathis Isaksen were the ones who came second.

Players gave a big round of applause to the hard-working team who'd generously devoted 4 days of their time (plus many hours before & after the event) to organise and run the whole show. Gerry Gavigan and stalwart draw-master Jenny Rofe-Radcliffe were ably assisted by Joanne Leung and ghosts Richard Wheeldon and Tony Atkins.