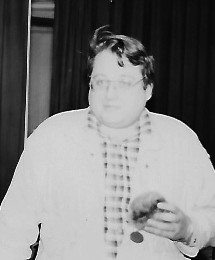 Marcus Bennett died recently after a short illness caused by cancer. Marcus was one of the main players of the Bournemouth Club for over 30 years. He was the club secretary from 1994 and ran the Bournemouth Tournament, being the main contact between 1990 and 1998. He was also on BGA Council from 1997 to 1999 and earned his shodan diploma (1d) in 1994. He is shown here receiving a prize at the 1990 Coventry Tournament.

The new club contact is Kevin Drake who said their dear friend will be sadly missed.