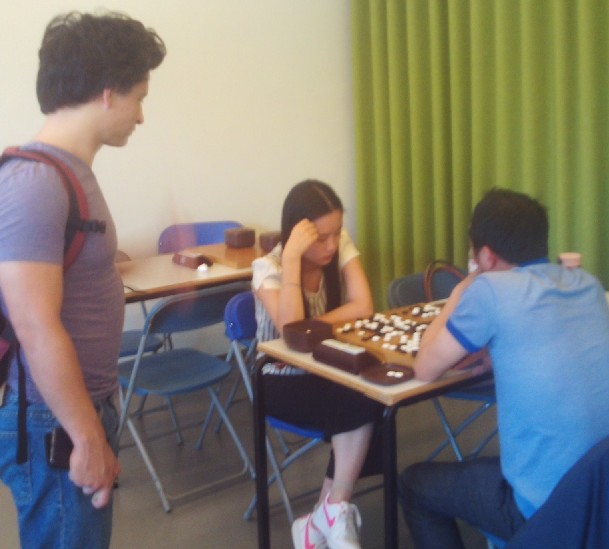 It was all Go on the first two days of the 22nd Mind Sports Olympiad (MSO). As in recent years, it was held at JW3, the modern Jewish community centre in London's NW3 district. Many games enthusiasts had travelled from around the world, to play the many traditional and proprietary board games on offer, such as Boku, Othello, Gomoku, Poker and Memory Tests, Countdown, Marco Polo, Settlers of Catan and Colour Chess.

24 players, mostly from London but also visitors from France, Germany and New Zealand, entered the MSO Go Open, a four-round McMahon tournament. Gaoge Wang 5d, shown in the picture playing the final, won all her games to take the Gold medal and the £200. Sharing the second place prize and also each getting Silver were Yousun Yang and Gong Cheng, with 3/4. Also winning 3/4 were Andrew Simons and Peikai Xue. Star player below the bar was William Taylor, on a visit from Paris where he currently works, who won all four games. Results 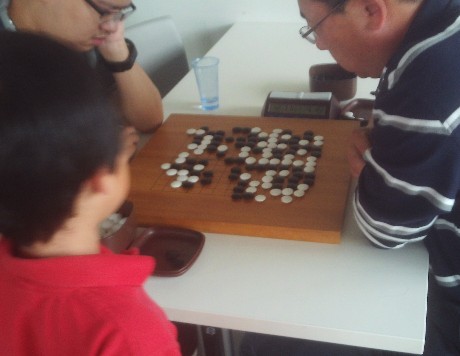 On afternoon of the second day, the Monday, the 13x13 event was held, with ten players. Despite Chao Zhang thinking there was overtime and losing his first game on time, he went on to take Gold with three wins. Young Edmund Smith 3k won a Junior Gold and Silver medals after winning his first three games. He shared second place with Peikai Xue 1k who also got a Silver. A Junior Silver went to Yue Wen (5k aged 7). Results

That evening eight players, who were not distracted by the lure of Dominion, took part in the 9x9. Winning Gold and all her games, including one by half a point, was Joanne Leung 1d. Second with three wins was Peikai Xue and third was Chao Zhang, the best of those on two wins. This time it was a Junior Gold that Yue Wen won; we will miss him and his brother Qi (7k aged 5) as they were moving to Japan the following week. Results