The 2018 British Youth Go Championship (BYGC) featured 57 competitors, aged from 5 to 18. This is believed to be the second largest such event (the largest was in 2005 with 74). There were two minibuses from Cheadle Hulme School and groups from two new clubs, Rednock School (Dursley) and Sheffield Chinese School. The event would have been bigger but the Edinburgh team had to withdraw through illness and there were no locals from the host, King Edward VI (Aston) School. 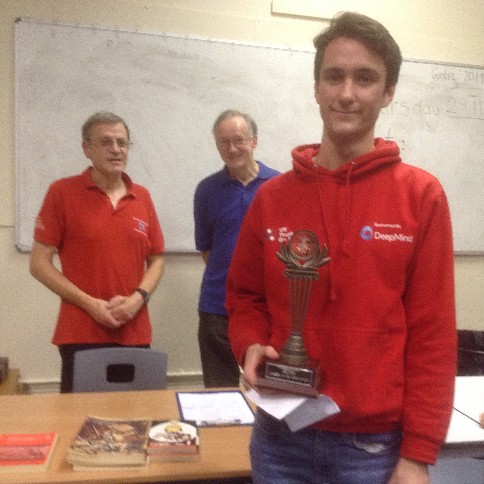 This year, due to an easing of the qualifying rules, there were no non-British players in an open group and 15 players, ranked 35k to 40k, played in their own section, a 5-round tournament on 13x13 boards followed by two rounds of 19x19 for the practice. The top group result was determined quickly so they played dan level adults in the last round in teaching games.

Thanks to the DeepMind sponsor and the large entry, all the winners below went home with cash and chocolates or appropriate Go-related prizes. Congratulations go to the new champion, Tom Bradbury of Cheadle Hulme School, shown here with the trophy he had received from the draw masters Tony Atkins and Martin Harvey.