London Rengo is Not Boring 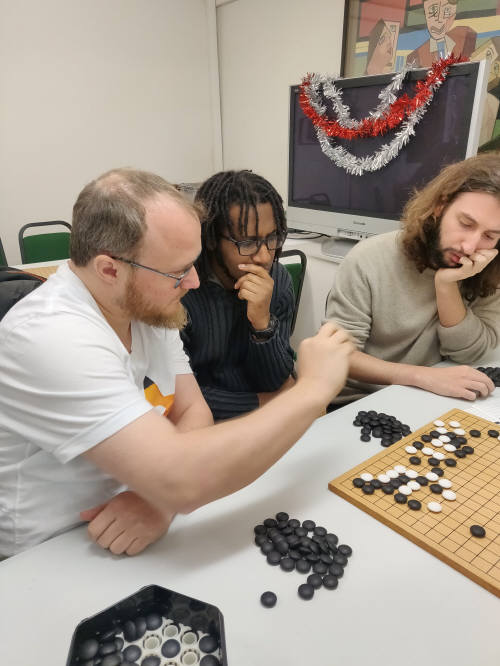 Nineteen participants ranging in age from mid-teens upwards, from eight countries took part in the traditional London Open Rengo tournament on the afternoon of New Year's Eve. We could have had eight teams, reports Jenny Rolf-Radcliffe, but that would have lent itself to a boring number of pairs. Thus we had two fours, three threes and one pair to make the games more interesting - after all, a large part of the fun of Rengo is to have games between teams of different sizes. This year was very balanced; at the end of three rounds there were no teams on zero wins and just one team on three wins. The unanimous decision was made to stop playing while we had a clear winner, and to get on with the eating, drinking and talking phases of the evening.

The winner was the most international team, shown above, consisting of Christopher Loudoux of France, Joerg Sonnenberger of Germany and Alessandro Pace of Italy. They were also the team with the highest average number of wins in the main tournament, suggesting I should revert to using main tournament MMS in the Rengo handicaps in future.