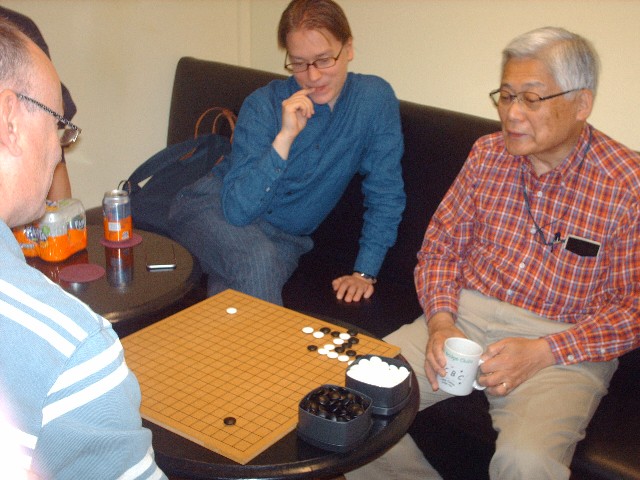 The Second Not The London Open took place over the second May Bank Holiday weekend at the London Go Centre. At 21, we had a slightly bigger entry than last year, reported organiser Gerry Gavigan, but we've still got a long way to go before we reach the size of its progenitor the London Open Go Congress. However in its own terms the tournament was successful. A nice feature of the weekend was the five or six people who just dropped in watch and enjoy the event, such as Bruno Poltronieri and Martha McGill. Antti Tormanen (1p) was the professional (thanks to the Nihon Ki-in); he gave four lectures across the weekend (check and subscribe to the LGC YouTube channel) and spent time reviewing and discussing games both with the tournament participants and also those entered into the Challengers' League (for the British title) that was running in another room at the Centre. He is pictured with Tanaka reviewing a game position. Antti's former teacher Jeff Su Yang (6d) also dropped in and we persuaded him to do a guest lecture with Antti too. Tanaka took some photos which should be available soon.

The overall winner was Paul Smith (3k Cambridge) on five out of six, receiving a certificate and the top cash prize. Kiyohiko Tanaka (1d Nippon Club) and Michael Kyle (2k Manchester) were equal second. Having missed round one, first below the bar was Joanne Leung (2d), and Edmund Smith (3k Cambridge) took the prize for the second. Dave Wheeler (10k Monmouth) was the highest-placed DDK and Ryan Zhang (17k London) got five wins out of six. On the Sunday evening there had been a four-round lightning tournament, won by Joanne Leung; she had beaten second-placed Andrew Kay (4d) in the first round. Oliver Bustos-Langton (7k Keele) and Francesco Chiarini (8k West London) both won three out of four.