As I mentioned in the last journal, because there are so many Go books, I tend to choose books where I know the authors. The names of the authors of All About Ko will be familiar to those who have collected Ishi Press or Kiseido books in the past. The first is the silver haired American Richard Bozulich, long time Go book publisher. I met him over the Go board one evening at the Nihon Kiin in his native Tokyo. The other also lives in Tokyo and is Dutchman Rob van Zeijst. Rob has been a familiar figure on the European tournament scene, and well deserves his 7d grade as he studied with the student professionals for a while and as proved by my games against him. As Westerners they understand how we learn and produce books in a style that fits our way of learning, unlike many translated books in the oriental style. 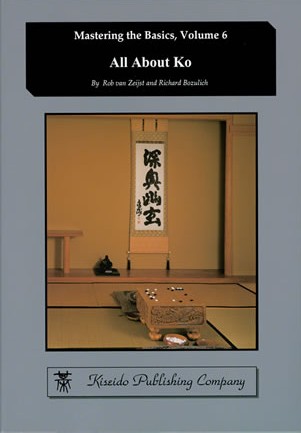 The last book on Ko was published over ten years ago and was thought at the time to be the worst Go book around, a feat since overtaken by a book from Korea. However this book redresses the balance and is to Kiseido's usual high standards. Gerry Mills rates it as Intermediate level.

Chapters guide you, tutorial style, through how Kos operate, about the value of moves, Ko threats, the various types of Ko, including multiple Kos, and some special positions that involve Ko (such as the Carpenter's Square). One thing to note, however, is that most of what is written about multiple Kos is only relevant to Japanese rules. What is written may be confusing as we get used to playing with AGA rules and the different Superko Rule therein.

Two thirds of the book's 250 pages are devoted to problems, 122 in all, interspersed with eleven game records from professional games that involve Ko. Many of the problems are based on positions within the games, so putting the Kos into context. The problems are well laid out with usually a double page spread, followed by the answers overleaf.

So get to know Rob and Richard and their books and look out for their next book in the Kiseido Mastering the Basics series: Attacking and Defending Moyos.

All About Ko is Kiseido K76.