The Book of Go 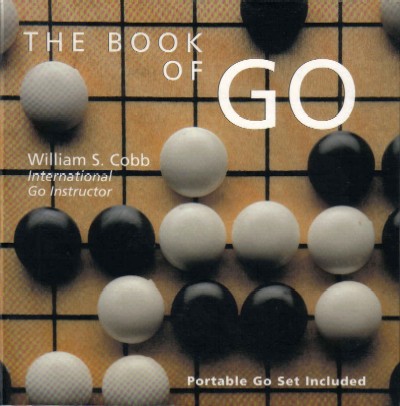 This beginners’ book provides a new variation on an old theme by including a miniature Go set which fits into a pocket bound into the book. The stones are a bit on the small side, but quite good enough to enable the beginner to play through the examples.

Bill Cobb’s text draws on the 1996 version of the Nihon Kiin instructor’s course I had attended the year before, and he seems to have been as impressed as Frank Janssen and I were by the methods of Yasuda Yasutoshi, who introduces the game via the simplified ‘Atari Go’ in which the first side to capture a stone wins.

Having decided to start with atari Go, there is a question of how to introduce territory. Bill leans on his background in Philosophy and strains to avoid introducing any unnecessary extra rules. By forbidding players from passing, the need for territory appears when you reach the end of a game in which neither side has succeeded in making a capture.

The result is a very elegant presentation of the game, but some established Go players may be a bit alarmed by the discussion of live and dead shapes, which are very different in first capture Go. However, this is a nicely produced package, whose size and price should attract those looking for a Christmas present for a non Go player.

The Book of Go is published by Sterling Publishing, New York.