"It is often said that people are losing heart nowadays. Am I the only one who feels that people, children and adults alike, look tired? I wanted to do something to help this situation, and a number of years ago I embarked on a plan of popularizing Go in the hope that I, as a professional Go player, could do something to help change society." 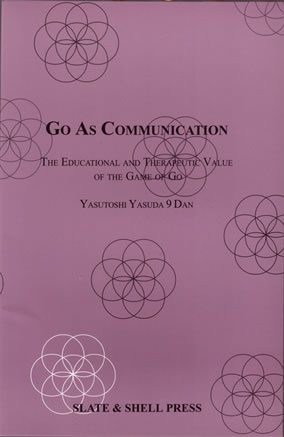 So writes Yasuda Yasutoshi 9-dan in the preface to his book Go As Communication, just published by Slate & Shell. Yasuda’s attention had been caught by a news report of the suicide of a bullied school child, and he had become

"...obsessed by the notion that I had to do something about the social problem in addition to simply popularizing Go."

The first part of this short (less than 70 pages) book is subtitled The Impact Of Playing Go. It tells about Yasuda’s visits to kindergartens, schools, homes for the mentally disabled, day care centres for the elderly and a school for the deaf. But most of all it tells about the people he has met there. Almost all those he writes about have some kind of difficulty communicating with others. Many are, to a greater or lesser extent, socially excluded as a result. The impact referred to in the subtitle is the improvement of their ability to communicate and the consequent reduction in their sense of isolation.

Part two of the book is subtitled How to Create a Go Program and gives advice on how to teach Go to children of different ages in large groups, and how to teach it in the other kinds of institution he has visited.

Part three is subtitled The Program Expands Around the World and gives a brief account of similar work that has been done in the Netherlands, Romania, the Czech Republic, Poland, Hungary and the USA.

Yasuda is well known as the inventor of Capture Go, and his book says a lot about this. What he says came as a bit of a surprise to me at first. I had always been led to believe that Yasuda’s main aim was to popularize Go, and that beginning with Capture Go was basically a technique to lead people to it gently. The expectation, it was alleged, was that the keen ones would then go home and learn the full game from their families, while the others would drop out.

Nothing could be further from the truth. “Popularising Go” is a phrase that is used occasionally in the book, but it isn’t the objective. Yasuda states his objective in terms such as “help change society” and “do something about the social problem”. He teaches Capture Go as a game in its own right. He recognises that a few people will move on to regular Go, but doesn’t get excited about it. If most people stick with Capture Go and enjoy it, that’s fine with him. Indeed, he explains that some of the mentally hadicapped people he meets will probably never understand even the capture rule, but will anyway enjoy and benefit from the even simpler game of just placing Go stones on intersections, and that’s just fine too.

Will this book do anything for you? Well, if you want to improve at tesuji or joseki, definitely not. It contains a basic explanation of the capture rule, but if you’re any stonger than 36-kyu it will teach you nothing at all about the game. If you want to teach Go to bright people who are able and willing to give you ten minutes of their attention, it may not help you much either. If you want to teach Go to large groups of people with low or mixed abilities and/or motivation, then it will certainly give you food for thought and may even help you.

But the people I’d really like to see reading this book aren’t Go players at all, but school teachers and care workers. If you can think of a person like that to whom you could give a copy of this book, I think you’d be doing them, and Go, a huge service.