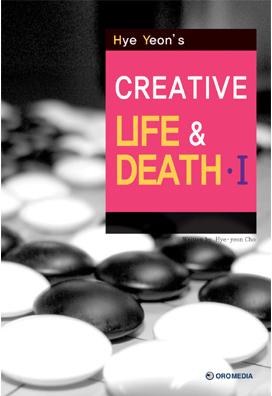 In her preface to Creative Life and Death, Hye-yeon Cho hopes that we can 'learn many wisdoms and share our hearts through Baduk'. The sentiment sets the tone for this book, which overflows with the author's enthusiasm. She presents some fifty problems, ranging in difficulty from amateur 1 dan to 7 dan (slightly weighted towards the lower-dan problems), and accompanied by around four hundred detailed answer diagrams. It is almost worth buying this book for the English translations alone - the answer diagrams feature several charming, often obscure turns of phrase such as 'White is crossing a brook with delight', 'Black builds a 6-point huge mansion!' and 'Black lives in peace. It's so cool!'. The book is nicely presented; every diagram is clear and the pages are generally well laid-out. However, in some cases the answer diagrams begin on the page adjacent to the problem, rather than overleaf, which may annoy some players. A further potential irritant is the fact that the problems are randomly ordered (the very first is 7 dan difficulty); however, I personally don't mind this approach and enjoyed working through the book in order.

The answer diagrams are very thorough and generally well-balanced, with around five diagrams for the easier problems and anything up to sixty for the hardest. Even if an answer cannot be found initially, the reader can congratulate himself for at least dismissing the main lines of an incorrect solution presented in the answers.

The problems themselves are interesting and pleasing. Hye-yeon seems to delight in burying the key tesuji deep amidst a trail of lesser tesujis; many of the harder problems feature a final twist even after several neat tricks have been found. They are definitely dan-level problems and require plentiful thinking time, but they do tend to be rewarding. The problems are probably all solvable for dan level players, and the numerous answer diagrams should make them accessible for SDK (Single-Digit Kyu) players who are prepared to consult the answers mid-solving. These diagrams are ordered with common wrong answers first ('to make fun for the readers') and slowly work up to giving the correct sequence, so this approach is plausible and even encouraged by the author.

The only fault with the problems is that a lot of them are blatantly artificial (as with problem 10, see below). About a third of the problems have that fake feeling about them - quite a fair chunk of what you've paid for. Again, the reader should know if this is likely to bother him. Personally, I found it somewhat off--putting at first, but given that I was reviewing this book, I persevered with them and it turns out that they're still enjoyable to read.

This book has fewer than fifty problems spread over more than two hundred pages, and there are plenty of better alternatives for players who just want to work through lots of tsumego quickly. It is, however, a good choice for any player looking for harder problems that he can devote a bit of time to, or who would like his interest in Go re-awakened through some of the problems' more fascinating twists. The problem presented is given as 2-star difficulty (2-3 dan) and admittedly one of the more artificial-looking in the book. However, it seems fitting, as the caption accompanying it is 'It's fun to read?' The answer to this question will probably determine whether or not you will like the book.