Subtitled A Guide to 3-Stone Handicap Games, Galactic Go is the first volume of a projected 4-volume series on 3-stone handicap games. Like its predecessor, Cosmic Go, which dealt with 4-stone games, it continues the stellar allusion to Takemiya’s large-scale style based on the handicap points and the perspective of the weaker player is assumed throughout. As White has the opportunity to play first in the empty corner in 3-stone games, josekis take on considerably more significance, accounting for the authors’ intention to produce separate volumes based on White’s first move and Black’s reply.

This first volume deals with a White first move at the 3-4 point and a Black small knight’s approach. Each of the 20 chapters covers a game, describing first a joseki or josekis and then a series of ‘Black to play’ problems in the middle game. The josekis are predominantly of the internecine variety with White usually making a wide pincer to prevent Black from settling himself easily in front of his handicap stone, and then Black counter-attacking just as aggressively. In common with several other books on handicap Go, Black is encouraged to attack from the start which, in this case, means that the josekis chosen are pretty complicated and this book is addressed to stronger players in the 4k – 4d range. 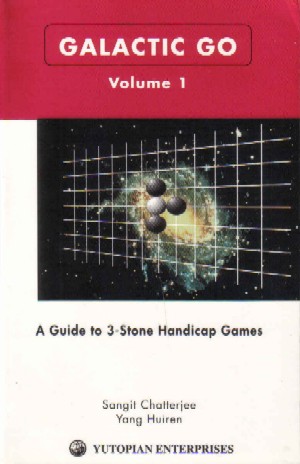 The middle game problems, on the other hand, I felt were standard single-digit kyu material: ‘direction of play’, tesuji, life and death, shape, oba (big points) and general positional problems. Problems relating to some frequently recurring local situations in handicap games and choosing the largest sanrensei, I found particularly useful.

The games usually proceed with Black making a sub-optimal move and, even though these games appear to be contrived, I couldn’t help wondering how Black could be playing such weak moves in the middle game and yet choosing complicated joseki such as the taisha. This was the main weakness of the book, I thought. Someone who felt comfortable with many of the josekis in Galactic Go, and wasn’t just playing them from rote memory, would be too strong to find much of the material on the middle game stimulating. Conversely, someone of around about my strength (4 kyu) would probably get more from the sections on the middle game. Galactic Go does not purport to be a joseki tutor; indeed, the reader is referred to established books on joseki such as Ishida’s Dictionary and though there are variations which either go beyond or do not appear in Ishida – notably in connection with the taisha and the 4-4 contact play which are dealt with in detail – there is none of Ishida’s lucid exposition. On occasion, josekis are described with what looks like an attempt to imitate Ishida, by including un-annotated excerpts from professional games.

The design of the book is certainly the best of any Yutopian book I’ve come across. Gone are the oversized diagrams and the sometimes out-of-place text. The layout is mainly in two columns with diagrams perfectly aligned with appropriate commentary - useful for concealing the answers to problems - and the book has a distinctly professional appearance. Unless, however, you are a strong player with a firm foothold in the labyrinth of joseki who happens to play a lot of 3-stone games, I am doubtful as to exactly how useful Galactic Go might be. Something for everyone in the 8k-4d range, say, but perhaps not a lot for any particular level of ability.

Galactic Go is by Sangit Chatterjee and Yang Huiren and is published by Yutopian Enterprises.