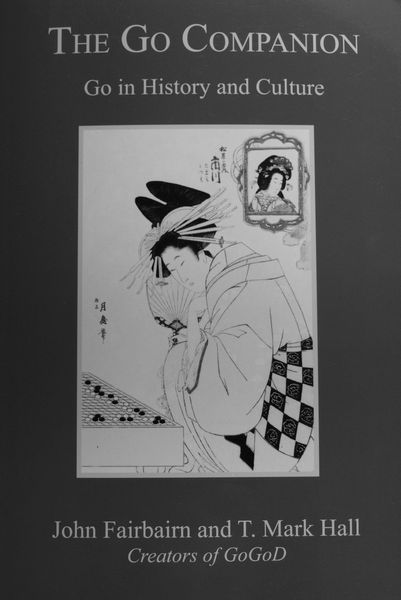 As I mentioned in previous reviews, I only buy books where I know the authors. So I had no second thoughts about rushing to buy this latest book, one of several that have been written by British Go players. No doubt most of you will have met John and T. Mark at a tournament or a seminar, and a lot have probably bought their collection of professional games, GoGoD (Games of Go on Disc).

GoGoD is not just games, but much more including a names dictionary and a collection of Go essays. This book is part of that collection of essays, brought now to the printed page by American publishers Slate and Shell.

My favourite Go book is "Lessons in the Fundamentals of Go", because, as well as the great didactic material, there are interesting bits to read in between. The Go Companion is the reverse with some Go bits in between the interesting things to read. It is a quite thick tome. You get 300 pages, but don't expect too much technical material: the subtitle Go in History and Culture tells you what to expect.

Actually the collection of essays is rather eclectic and has been put together by John and T. Mark from various sources, whilst they have been scouring the Go bookshops of the world. There are some Go problems and some game records to illustrate a particular point or player, but a lot of text only essays too.

There are sections on the opening, on komi, players, books, sexy sekis, history, modern Go, amateur and professional Go. There is John's quite long review of Go in wartime Japan, including the atom-bomb game, and some short two page essays.

Two guest authors feature too: Ivan Vigano has written about blind players in Japan and Pieter Mioch has written on the 45th Judan and the 2006 World Amateur. This last piece was especially familiar to me as I edited the IGF website version of the essay at the time.

There is a good selection of photographs to illustrate the histories, though the printing is rather flat and the picture on page 172 is pixilated (hopefully not by the sensor).

So if you enjoy reading more about Go than just about how to play it, then this book is a must.