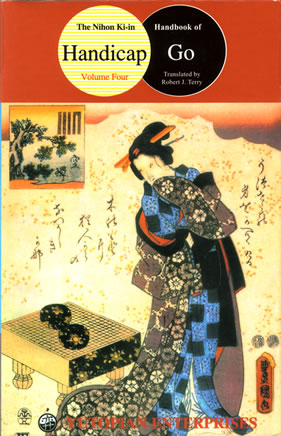 “But surely, if White attacks my corner, I need to defend it.” Wrong. After White’s first play, wherever it is, there is only one stone under attack, and it isn’t black. “So what’s the best way for a handicap player to attack white stones?” That’s what this book is about.

Middle-game techniques are much the same whatever the handicap. And it is in the middle game that the weaker player expects to lose ground; if this were not so, there would be no handicap. What this book teaches is to preserve the initial advantage of the handicap stones at least until the start of the middle game. And it does this by showing how to use the handicap stones for their proper purpose; attacking. This message jumps off nearly every page in the book.

There are seven main chapters, showing sample opening sequences in handicap games from nine down to three stones. They are rightly viewed from a whole board perspective.

“But the trouble is, I learn all those sequences, and then my opponent goes and plays something different.” Well, no-one ever got strong at Go by learning sequences off by heart. Any White player worth her salt will be able to get you out of the book lines. No, these sample openings can only exemplify the principles which lie behind good handicap play.

And in my opinion they do it very effectively. I shudder to think that my handicap opponents are going to start playing this aggressively.

Any criticisms? Well, nothing serious. Yutopian use large clear diagrams which actually look like a Go board, so that it is easy to relate them to actual play. And they often show the whole board, where another publication might show only a portion. This is all to the good, inasmuch as it reminds Black players to take the whole board into consideration at every move. But obviously greater brevity in the diagrams would enable more material to be included in the book’s 237 pages.

This book does what it sets out to do, and to any player struggling to reduce their handicap it should prove worth buying. But if in your heart of hearts you really believe that the way to preserve the advantage of the handicap stones is to defend them strongly, then this book may not be for you. You had better cling to your belief. And your grade.