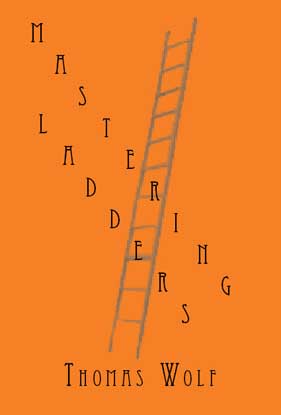 Mastering Ladders by Thomas Wolf is a slim volume, with 30 pages of theory and 72 problems. However it is supplied with a CD with a staggering 256,000 ladder problems in sgf format (did you think 1001 Life and Death problems is a lot?). The author presents a set of rules for deciding whether a ladder will work or not, based on a set of 6 imaginary diagonal lines drawn on the board, and guidelines to simplify their application.

Every serious Go player knows that ladders are an important basic technique, affecting choice of joseki and middle game fighting sequences, and there will be few who haven't heard the proverb "Don't play Go if you can't read a ladder''. Many will also have read Kageyama's popular book 'Lessons in the Fundamentals of Go' which, while stressing the importance of reading ladders, is very disparaging of attempts to apply shortcut techniques such as those presented in this book.

It is worth asking how practical are these techniques to apply in the time constraints of typical weekend tournaments. For relatively simple ladders, where the question is whether stones in the vicinity of the obvious path of a ladder do or do not break it, they should speed up decision making and help avoid some costly mistakes. For more complex ladders involving several twists and turns, I have severe doubts. Applying the rules and guidelines, you can see how a ladder can be turned away from a potential ladder breaker. Then you may need to draw 6 more lines in your imagination in the new direction to decide if stones in the new path alter its toxicity, or lead to yet another change of direction and so on. And anyway things are different when there are stones near the edge of the board and the guidelines break down: then you have no choice but to read it out, just as Kageyama says. You would have to be very confident of your memory of the rules and the accuracy of your reading if you didn't want to risk a disaster. I tried drawing up a decision tree to summarise the rules, and even without addressing the edge effects, it had 8 Yes/No questions (14 in the longest path). I can see how all this could be useful to a Go-playing computer program, but for mere humans remembering all this would require a very good memory and a lot of practice.

The production quality of the book is good (the misspelling of names apart - see later). The text and the diagrams are clear and not over-dense.

Most of the 256,000 problems on the CD, you will not be surprised to learn, were computer generated. If you solve 10 a day you should still be working on them in 2080, should you be so lucky as to live that long, so perhaps that's not the idea. Fortunately strong amateurs, including our own Matthew Macfadyen and Charles Leedham-Green (both names unfortunately misspelled, assuming their spellings on the Rating List are correct), have selected 268 of the most interesting ones. The point of the rest of them on the CD is not clear to me, except as an academic exercise or research tool (the book appears to be a by-product of the development of the GoTools software). The author has a website with a program that can be used to work through the problems. However, the problems themselves are not available on the website and there does not appear to be a way of loading them from the CD, so to use this you must enter the positions yourself. This seems like a missed opportunity, but there are many free and commercial Go game viewers you can use for loading and working on them locally.

Also on the CD are 110 professional games drawn from the GoGoD database where ladders played an important role, including cases where an advantage had been gained even when deliberately playing out a broken ladder.

In summary, I think there is some value in these guidelines, for simple situations at least, and the discussion of sacrifice/squeeze tactics and the appearance of ko in solutions is entertaining and instructive. The book has at least opened my eyes to the possibility of successful ladders in situations I would previously have dismissed without much further thought. This is a narrow subject, pursued in depth, so in my opinion this is not a book that should be high on the priority list for a beginner whose money would probably be better spent on more general instructional material, but it should hold some interest for more experienced players. It also sounds like a dry subject but actually I discovered it can be quite fun. Ladders can take on all sorts of complex and artistic shapes (see Nakayama's `The Treasure Chest Enigma' for some famous examples). My guess is that reading it will improve your handling of ladders in your games at more or less whatever strength you happen to be, and anyway it will be entertaining.