Update from three weeks before the week.

As some of you are already aware, we’ve been looking at the idea of getting involved with Learn Go Week, starting on Saturday 13th September 2014.

It began as an Australian led venture and has international appeal to promote Go in public spaces, meaning it will be great for people to get involved, to further publicize Go locally in the UK too!

Our aim is for Go players to join together and arrange public displays of playing Go with their friends, family and co-workers, during the week of the 13th September. We can then interact with these digitally and hook on to the Learn Go Week in the online sphere, using

. This will help push Go further and promote our association as a welcoming place for people to begin their new hobby!

Each time you Tweet about Learn Go Week or your event, be sure to put #learngoweek, #Gogames and #boardgames to give it maximum circulation and to add @Britgo to keep us up to date with the event you have planned in the UK as they happen!

It’s also been arranged for Go Game Guru to advertise the British Go Association on their website under the partners section in an effort to promote ourselves, which is great exposure for Go in the UK!

If people join together from each part of the country and play 'Go in the Park', 'Go in a Cafe', 'Go on Campus' or 'Go in the Pub', being sure to invite as many non-playing Go friends as you feel comfortable to teach, and can send us photos to share on our social media and website, in the run up to and during the week, so that we may interact with other Go Associations involved in the event, then this could have the potential to get people talking, as it's a focused national and international effort. 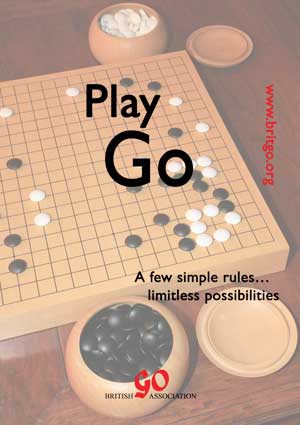 At the very least it would give each Go player a unified time to teach "that friend who has always been so keen to learn, but never really got round to it"... Now, we all know someone like that!.. I’ll be teaching some of these unsuspecting people on the University Campus in Nottingham. In order to make this a spontaneous, though consistent national effort, feel free to download as much of the Play Go Marketing material as you would like to.

Also, during Learn Go Week and the following week, we will be offering online teaching sessions for beginners via the britgo teaching account on Kiseido Go Server (KGS). This will be geared at new people to the game, and therefore in the run up to this we would be looking for volunteers that might be able to help Roger Huyshe, should we have a fairly large influx of games to organise during the week.

As of Monday September 1st, I will have some further supporting material, such as a miniature Go set and a flyer advertising follow up beginner sessions on KGS, to send out as a digital version to anyone interested and that has requested it prior to the 1st of September. Therefore, if you would like to arrange something publicly in your area for Learn Go Week, or if you would like to offer help with the online teaching session, then please email me.

I look forward to seeing what we can all make of this.