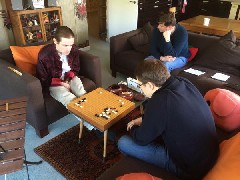 Game 1 of the best of five title match for the British Championship was played on Saturday 11th October in Milton Keynes. Current champion Andrew Kay from Birmingham played black against Alex Kent from Chepstow, starting at 10:00 with a break for lunch (at a ramen restaurant).

The game was broadcast in the British Room of KGS (gokgs.com). Andrew won by resignation at about 15:30