All Go for British Youth at Space Centre 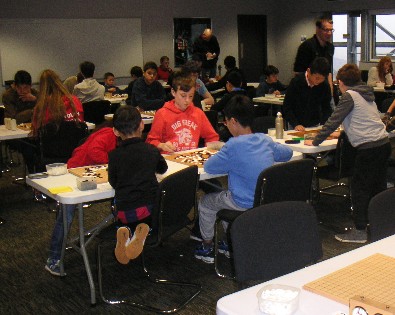 This year the BGA decided to hold the British Youth Go Championship at the exciting location of The National Space Centre in Leicester. Previously used as the venue of the East Midlands Tournament, the conference rooms made a very comfortable venue for the 43 young players, aged from 5 to 17, grades 2d to 37k, and their adult helpers. There was a long lunch break so there was a chance to view the exhibition, however the promised free tickets did not materialise.

The players battled over five rounds to decide the winners in each age category and in the team competitions, as well as the overall winner. This was all kept together by tournament director Tony Atkins using the Smudgy draw system (invented by Simon Goss). However despite one or two data errors, players playing the wrong opponents or suddenly announcing early departure, causing some problems, the youngsters did not complain and were happy whoever they played and many went away grasping Go book prizes.

The best puzzle-solver (based on their grade and expected score) was Jan Kudla.