The 42nd London Open was dominated by Sai Sun (5d) from Beijing (shown playing Andrew Kay). She won three titles: the Open, the Lightning and also the Pair Go with Xinchi Gong. On hand to do game analysis and lectures (as shown) was the professional from Romania, Catalin Taranu (5p). He lectured on the opening and analysed the game between Andrew and Sai. In all 76 players took part in the event, held as usual at ISH in London.

We are really keen to get the 2016 League going as soon as possible as so many games weren't played over the summer months last year and in most cases were declared drawn. Please could all current teams confirm as soon as possible that they'll be playing and provide up-to-date details of the players in their team and who will be acting as team captain.

Now is a great time to set up a new team so if anyone wants to join in please don't be shy. Email onlineleague@britgo.org.
We will be making one change this, year, draws (awarded when a game isn't played) will only count a quarter of a rating point to each side not a half. This gives more credit to teams and people that actually play.

In the latest round the UK team lost to Croatia, Slovenia and Serbia.

The 2015 Title Match is between reigning champion Andrew Kay and challenger Andrew Simons. Each has won one game, and the date of final deciding game is to be announced soon on Go-Talk and in the Calendar. There will be a live relay on KGS in the British room.

We are restarting the Sunday evening teaching sessions. These will be on the FIRST and THIRD Sunday of each month, starting at 19:00 on KGS in the British Room (look for “BGATeach”). The sessions will be broadly aimed at the 3 – 10 kyu level, but weaker (and possibly stronger!) players will find plenty of interest. Bill Streeten, former BGA Secretary, Council member, long term member of North London and then Wanstead Go Clubs, died peacefully on 23rd December. His cremation is to be at Hastings Crematorium on Friday 22nd January at 11.30 am. If you would like to attend, please inform his daughter Nicola, nicola@streetenillustration.com as she needs an idea of numbers.

Steve Bailey writes: "I first got to know Bill when he was helping at the Canterbury EGC back in 1992. At the time he was a few stones stronger than I was, but we started playing each other, either in tournaments according to the draw or in the gaps between rounds when we would play a slow game in around 15 minutes!

Bill was a Cambridge graduate and lived in North London, where for several years he hosted the North London Club, and later Wanstead where he was a regular member of the local clubs. Then in 1998, we were both asked to become council members which we agreed to do. We served alongside each other, in the days before email was commonplace, attending several meetings each year in various parts of the country as each member took turns to host them. A job that needed doing, but not very exciting. Bill had been a civil engineer by profession and as an engineer myself (electrical), we always got on well, discussing the ways of the world and engineering projects - including Bill's railway viaduct "up north". Mostly meeting at tournaments, we managed to enjoy each other's company more at the various European Congresses when we both attended. Two that spring to mind in particular are Berlin and Marseilles.

Eventually Bill decided to move to Hastings to be near his daughter, Nicola, who had in years past organised the refreshments at the Highbury London Opens. The BGA took the opportunity of his move to hold the British Congress in a leisure centre in the town - a venue he found. Being close to his family was obviously good for him and whilst he played much less Go, he still managed weekly games against other local players - interspersed with Scrabble."

Discounts on Books and Sets

Pentangle's new website is now up and running. They have reduced the prices on many of the Go books and some equipment by around 25%. The new website will make it possible to filter books by several criteria to help find books of interest.

I'm told that the 15% BGA reduction is still available to members by using code BGAMEMBER via http://www.pentangle-puzzles.co.uk (at checkout?). Or follow the "how to order" link on the BGA Books and Sets page. Also mentioned on this page is a 10% discount on selected items for beginners who are not members.

Voting for our second Annual Awards is now open - see our 2016 Awards page.

Our page is now much better “liked" than it was: we’re over 820 now. If you haven’t “liked” us yet why don’t you do so now? Every “like” we have gets us more publicity for our news and events. It also seems that the number of “likes” seems to be important to people in social media - I’m not sure why!

Some of the latest changes may have passed you by: we’ve put significant effort into making the path through our site much better for people who don’t know anything about the game or who are novices (and want some signposts as to how to get better). So when you recommend people visit us you can have more confidence that they’ll be able to play afterwards.

We’re about to start planning for our upgrade to Drupal 8, so if any of you are familiar with Drupal or HTML (so that we can redesign some pages) please get in touch.

Our AGM will take place during the British Go Congress in Sheffield. It is scheduled for Saturday 2nd April at around 6:30-7pm, immediately after the T Mark Hall Foundation AGM. Members are reminded that any motions you wish to have on the Agenda need to be received by the Secretary (secretary@britgo.org) six weeks before this, i.e. 20th February.

Paying your Subscriptions by Direct Debits

This has been a request for a long time and we’ve eventually found a service provider, not one of the normal banks but authorised by the Financial Conduct Authority, who is able to provide this facility for us. So we’ve added this to the payment methods on the Membership pages. The cost to us of using this service (1%) is significantly less than paying by credit/debit card or Paypal. 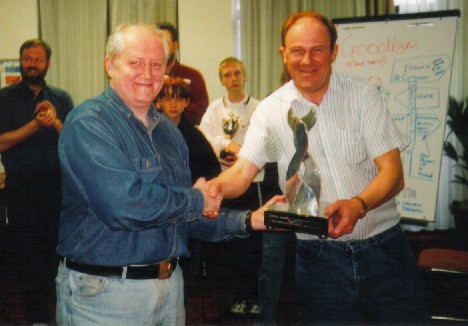 T Mark Hall (shown here, left, winning the British Open trophy in 2000) died in December 2013 and left a large bequest for the purpose of promoting Go in Britain, as mentioned in BGJ #170 (Page 7).
He left approximately £300,000, not directly to the BGA but to the T Mark Hall Foundation, a Company Limited by Guarantee, the directors of whom are the three officers of the BGA and John Fairbairn, T Mark’s lifelong friend and collaborator.

The object of the Foundation is to promote the playing of Go in the UK, and specifically to:
* Maintain and store the T Mark Hall library until such time as a permanent place can be found to keep the books, magazines and pictures;
* Undertake research to find a permanent London Go Centre which would be open most afternoons and /or evenings;
* Provide financial grants to young members of the BGA to assist with Go tuition or living costs to enable them to study Go in the Far East for periods of up to two years.

The directors have concluded that a Go Centre would not be viable but that a Mind Sports Centre might be. The English Chess Federation has joined discussion, showing considerable interest but they have not made a formal commitment. The directors have contracted Amanda Ross, a business consultant and strong chess player who also runs the Casual Chess Cafe in central London to do a feasibility study. The result of the first phase was that all parties agreed to aim for the purchase of a permanent home, rather than say a sub-lease or charity-type outlet. If successful, the premises would suit drop-in players throughout the week and, at least as important, be a venue that would be a focus for publicity for Go and Chess.
The work is now moving to the next stages of identifying possible sources of additional funds – a total requirement of around £2M is estimated - and property selection. Possible funding sources include grants for community projects, crowdfunding, and donations/investments by philanthropists. If anyone has any ideas on funding sources, please contact one of the Directors. 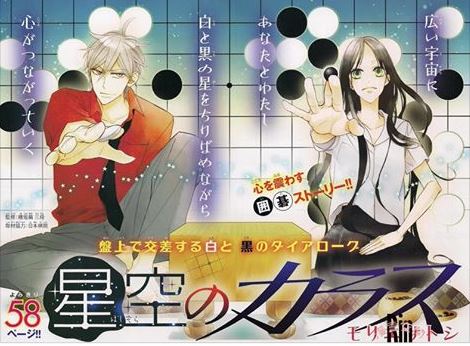 One aspect of Japanese culture that has quite a substantial following in the UK is Anime and Manga. Some members have found that a Go stall at their exhibitions attracts plenty of interest; for example Martin Harvey's team of nine at the November Animeleague exhibition was kept pretty busy throughout the day and it did result in subsequent visits to the Manchester club. Manchester have been doing this type of event for some years and partly as a result now have a weekly attendance at the club of about fifteen, sometimes over twenty.

Are there volunteers locally who would like to take part? If anyone wishes to put a team together, check the link for Organisers' Material within the Members' Area. And do feel free to approach any member of Council for help or support.

If you have forgotten your logon details, visit the User Page where you can reset your password from the link on the top right. Unless you have an older account, your user name is first name space surname.

Contributions are most welcome from players of all grades. Guidelines Next copy-date is 29th February 2016.