Most established clubs hold weekly (or less frequent) meetings, with the main purpose of playing games. A regular feature should of course be the playing of teaching games against weaker players. Apart from this, several kinds of events designed for teaching have been tried. The following sections describe several ideas (by no means exhaustive).

Two of the strongest players in the club play a game, while a third gives a running commentary to explain what is going on. These events are very easy to organise, and they can be extremely enjoyable if the commentator is skilful enough. There is a danger that the players will interrupt the commentator's explanations, and the commentary will then turn into a high-level discussion between the players, which few of the audience wil be able to follow: a good commentator will prevent this.

A game is selected, e.g. one played at the club the previous week, and (preferably) two of the strongest players take it home and think about it. One of them gives a 30-minute lecture on the game. In planning such a lecture the following points should be borne in mind:

These events can be highly enjoyable and informative, but they require a considerable amount of preparation by the person who is to give the talk.

The BGA has a scheme for organising visits by the country's dan-grade players to clubs. These can be used as foci for press coverage, and may take many forms; perhaps the simplest is for the whole club to play the visitor simultaneously. All clubs are encouraged to take advantage of this facility.

These are really a matter for small groups of players to organise, outside of normal club meetings. The recommended approach is to have one member who has studied the chosen topic in advance. This can be a game he has played, a professional game he has studied, or a joseki that he has read about in text books. This person then presents the subject and the others join in the discussion as seems appropriate.

The success of such events depends almost entirely on the personalities involved; some study groups generate highly successful social evenings which also contribute greatly to the playing strength of those involved, while others degenerate consistently into acrimonious debate. In any event, it is important not to allow such groups, whether meeting as part of a club night or not, to form a clique from which beginners might feel excluded.

Teaching events which involve active participation are often more beneficial. This section describes some games which are designed to improve some aspect of the players' Go. Other suggestions would, of course, be welcome, however experimental or unusual they may seem. 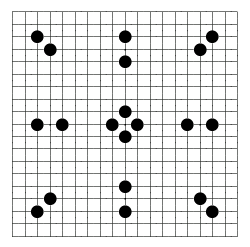 Set up a board with several black stones, such as the position in figure to the right (which strongly favours Black). White moves first; the objective for white is to make a living group, and the objective for black is to kill all of white's stones. This game is particularly beneficial for players below around 15 kyu, and is intended to give more confidence in making invasions, and practice at techniques for killing unreasonable invasions.

Other starting positions are of course possible, for example black stones all around the edge of the board, or with different enclosures in each corner. The difficulty can be varied by adding or removing black stones. The game may also be played on a smaller board, with fewer black stones.

Starting with an empty board, each player takes twenty stones. Black plays the first move in his upper right quarter of the board, and white follows in the diagonally opposite quarter. Each player's subsequent moves must be in the next (clockwise) quarter from their own preceding move. After twenty moves each have been played, both players examine the position to decide which has the better position, and which direction the game might proceed in. Of course it helps if a stronger player is observing.

The idea behind this game (devised by Matthew Holton) is to force both players to think about how their stones are working together, and to improve their approach to the opening. By forcing moves to be in a different quarter each time, the players usually avoid complex fighting and are forced to think strategically.

Experiments in teaching Go are often more interesting for the participants than any sort of event following a tried and tested formula, and Go clubs are encouraged to try out anything which seems like a good idea at the time. If the ideas work particularly well, details should be sent to the BGA Secretary for inclusion in later editions of this document.

One important objective in teaching is to help people to look at familiar situations from a new angle. In this respect, for example, an exercise held at Reading some years ago in which the whole club spent an evening playing out the last 50 moves of a game (with different opponents, but always starting from the same position) was extremely interesting.