Go for the Blind 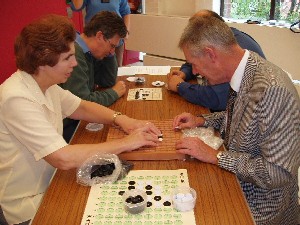 Blind Go in the UK

Go for the blind is very well established in Japan and Korea; there are strong dan-level players and tournaments for them. A Korean 5 dan took part in the European Go Congress in 2004 against sighted players, using a tactile Go set and a European dan player, who has lost his sight, also took part in the European Go Congress in 2012. In the UK, there are a couple of adult blind players playing in BGA clubs and on the Internet, but the tactile sets have been hard to come by. Some pioneering work began in the UK in 2004 in further promoting Go amongst the blind and visually impaired. Two schools events, and a seminar for adults at the Gosport Discovery Centre in Hampshire, and other sessions, have been run by Peter Wendes, using tactile sets imported from Japan. Long term it is hoped to hold a blind players tournament in the UK someday.

Blind Go was the subject of an 'In Touch' programme on BBC Radio 4 broadcast on 7th December 2004; it featured Crown Woods School in Greenwich, venue of one the school events run by Peter Wendes.

Morino sensei of the Japan Go Society for the Visually Impaired kindly donated tactile sets which have been available free to any group or individual interested in making Go available to blind players. Please contact Peter Wendes 02392 267648.

Peter also maintains a contact list of blind players and a list of professionals working in the field of visual impairment. These are available on request.

Sometimes a player can be found at a tournament who is blind or visually impared playing with a special tactile set, whilst the sighted opponent can use a normal board in parallel.

In Japan there have been tournaments specially for the visually impaired. You can read an (off-site) report by Yuki Shigeno, a professional player, on such an event. 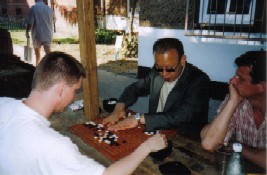 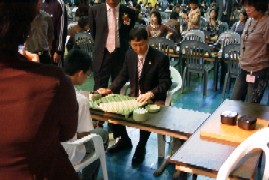 New Board for Visually Impaired

We have recently (2021) been made aware of a new paper board where the intersections rise or fall to represent the two colours of stones and flat means empty, but we have not yet seen how easy it is to use. Poppu Go Chess Board.